On some recent climby training rides, especially when feeling effects of accumulated fatigue, I found myself wishing for a lower granny gear.  I’ve been riding a 28/42 crankset + 11-36 cassette.  With a 2.2×29″ tire, that’s roughly 22.5 gear inch granny gear (and 110.3 gear inches on the high end).  I’ve been riding this for a while now and it’s been fine for normal, unloaded riding.  Throw in back-to-back long/climby days and 20+ lbs of gear, water, food, and trying to ride at a more sustainable “all day” pace – a lower granny gear would be nice.

So I figure I have two options:

I opted for #2 and installed it last night.  It offers a lower granny gear without sacrificing the upper range.

And here it is, in red of course.  Very nice looking! 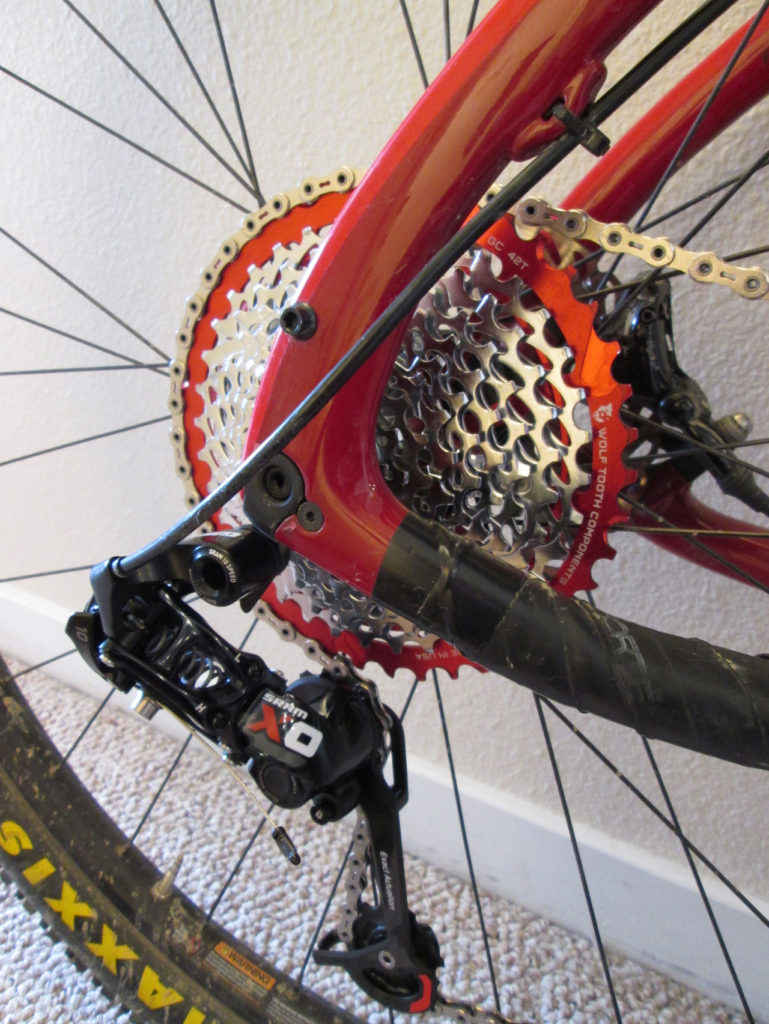 In the work stand everything sounds and works fine.  For the first time ever, I actually had to add links (just one) to a new chain for it to be the proper size.  We’ll see how it works in the field soon enough.  Mental notes to myself: how noticeable the lower granny gear is?  Has shifting crispness has changed at all? Are the jumps between the 13-16-19 cogs more jarring?

While on the topic of gear inches, I just had to figure out my granny gear of the commuter bike I rode on the Great Divide in 2010.  28/38/48 crankset + 11-32 cassette with 2.2×26″ tires: 23.1 gear inch granny gear.  So slightly harder than the cutthroat’s 28/36 granny.  Considering I had never ridden in mountains, inefficient bike position, a heavy bike, and a far more/heavier gear I don’t know how my knees didn’t explode.  On the high end, the 48/11 combo gave 115.2 gear inches.  Even with such a tall gear, I remember spinning out on various descents, wishing to be able to pedal to generate some warmth.

I signed up as a Southbound racer for a few reasons: to be part of the Banff Grand Depart experience, easier travel arrangements (fly to Calgary, have family/girlfriend waiting in Antelope Wells), and more chance of companionship.  Ego, convenience, and safety in numbers.

There’s certainly an appeal to being part of the mass start.  Being mid-pack with other racers, lots of people on the route would know what we’re doing.  I remember riding into Cuba and having drivers wave at us as if they knew we were touring the GDMBR.  It felt good to get that recognition.

Travel arrangements are easier for me ending in AW.  My family lives in the Denver area, so for them to get to AW is just a 11 hour drive.  I imagine being able to arrange something roughly like, “once I’m halfway between Pie Town and Silver City, Drive to Silver City and wait there.  Once I hit Separ, start driving to the border.”

Companionship shouldn’t and can’t be counted on, but early in the race I think it would help to build confidence before settling into a routine.  Knowing that there will be 100 others around +/- a few days is psychologically comforting.

I think I would prefer ending the race in Antelope Wells, having completed the route the other direction.  A tour or TD race is such an experience that I want a chance to reflect on the trip.  The solitude of the desert and boredom of flat pavement would let that happen.

I remember riding up the Spray River Trail rounding a corner and suddenly being at the trailhead, my GDMBR trip finished.  I suddenly became just another tourist in Banff.  Instant culture shock.  Suddenly thrown into a crowded town that doesn’t match the experience of the preceding 2,700 miles.

Reasons to NOT Ride Southbound

Cold is one of my greatest fears. The 2014 race started with a week of snow and rain.  As someone whose feet sweat profusely and constantly has cold hands (poor circulation?), that sounds miserable.  Like quit-the-race miserable.  Walking through snowmelt runoff streams for the first few days – I imagine my feet would get numb and stay that way all day, regardless of clothing choices.

Then there’s the “unknown.”  Most rookies go into the race with no firsthand knowledge of the route.  I have the small advantage of having ridden S=>N once before.  I know roughly what supplies are available at various towns.  I remember some water sources in dry areas, and can remember roughly what much of the route looked/felt like.  If I were to ride southbound, my knowledge of the climbs would be wasted.  I had to hike up Fleece Ridge and suffer up the climb out of Radium, but I got to enjoy massive descents down to Abiquiu and Del Norte.  I don’t know what the experience is like in the opposite direction.

When I was sure I was racing Southbound, I mostly felt worried about prolonged wet/cold and being in bear territory on day one.  Plus, ending day one with a 3 hour hike-a-bike up the quad trail/river to Koko Claim is a bit daunting.

When I consider riding Northbound, it feels like a weight is lifted from me.  I’ve ridden that direction before.  I don’t have to worry nearly as much about weather.  Getting to Silver City and beyond should be a relatively simple first day.  Getting through the Gila to Pie Town and Grants will be challenging, but it can be planned for.  I’m accustomed to riding in mountains, unlike eight years ago.

I think I will gain a lot of confidence on days one and two if starting in AW.  I remember struggling on the “hills” between Hachita and Silver City.  I remember the first climb on gravel heading into the Gila, how I had to walk after a few hundred yards.  And also the climb out of Black Canyon 30-40 miles later.  From my journal:

The climb out of the canyon was absolute hell. It consisted of many miles of steep roads covered in loose gravel. It had me pushing my bike in no time. Even that was difficult.

After checking elevation profiles on Strava, the climb out of Black Canyon is a 2-mile 6-7% climb.  “Absolute hell” for 2010 Dave, but not a big deal at all for 2018 Dave.  I look forward to doing those climbs again and thinking to myself “hey, I can do this thing!”

I’m 90% sure that I’m going to ride South to North at this point.  And if I do choose to go Northbound, the question then becomes: leave with the NoBo Grand Depart, or leave a day or two earlier, or leave a few hours earlier (daylight is more of a premium in NM)?

February
I continued with TrainerRoad’s Sweet Spot Base II Mid Volume plan, which wrapped up on Feb 24.  I only did a total of three outdoor rides this month for a total of 73 miles.  It’s easy to look at that and feel unaccomplished.  I have to focus on the fact that I did 14 hard trainer rides, which are far more effective at building strength than outdoor miles.

March
March started with a recovery week after the Sweet Spot Base phase, then another FTP test.  This time I scored an FTP of 242 – up 4% from my previous test and up 10% from my first test.  W/kg: 3.68.  It felt good to achieve a higher number.

The next few rides I did outside, and I noticed that I felt unbalanced on the bike.  Riding outdoors (and actually moving) didn’t feel natural.  That was a bit disconcerting.  I decided that it was time to start riding outdoors more.

I attached all bags, bottle cages, lights, and gear to my bike in mid-March to start acclimating to the heaver load.  I’ve loaded about 95% of my gear (some kinks need to be worked out), and now always carry extra water for training weight.  I even did a night ride to start getting rid of the “dark trails are scary” feelings.

I ended up logging 402 miles over 12 rides plus another three trainer workouts.  I definitely need to step it up in April.